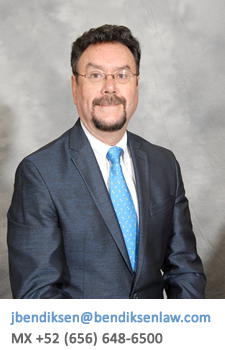 Graduated in 1970 from Universidad Nacional Autónoma de México (Mexico City), receiving a LLB. Received a Masters in Comparative Jurisprudence (diploma) from New York University in 1974. Received a JD from ICFES in Colombia, South America, in 1982.

Practiced with the law firm of Baker & McKenzie from 1970 through 2010, where he was elected international partner in 1977. Founding partner of Béndiksen, Enríquez, Salazar, Santoyo & Yanar.

Writes widely on domestic and international tax topics. Among many other publications, Mr. González-Béndiksen: