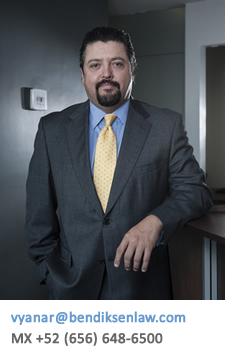 Graduated from the Instituto Tecnológico y de Estudios Superiores de Monterrey in 1993, with honors and received a Master of Laws Degree (LL.M) from the University of Texas at Austin in 2001.

Mr. Yanar-Ríos has been a law professor in ITESM, Juarez Campus, since 1994 teaching Business Law, Free Trade Agreements, Customs Law, International Contracts, Private Law and Foreign Trade Legislation. Professor of Law at the University of Monterrey “UdeM” of the Masters Degree specializing in Corporate Law and has recently finished teaching as a head professor in charge of Foreign Trade Legislation and Customs for the Tax Masters Degree at Universidad Autónoma de Chihuahua.

The areas of his expertise include foreign trade regulations and customs, including export programs such as IMMEX (maquiladora) companies; specializes in the interpretation and implementation of company operations under the different Free Trade Agreements which Mexico is part of; specialized in the application and analysis of preferential duty rate programs, determination and application of duty preferences, customs analysis of import and export operations, determination of the corresponding tariff classification, analysis of the customs origin of products, application of Mexican Official Standards (NOMs), customs audit, administrative litigation, among others.

He has actively and directly participated in developing amendments projects to the Customs Law and specifically the Decree for the Promotion of the Manufacturing, Maquiladora and Exportation Services Industry” (IMMEX Decree). He participated as an editor and co-author in the NAFTA HANDBOOK, Energy chapter, editorial CCH Incorporated as well as an editor and co-author in the book Doing Business in Mexico, in the Customs and Mexican Official Standard (NOM) chapters, published by Juris Publishing. Simultaneously, Mr. Yanar has been author of several memoranda and articles in local, nationaland international publications.